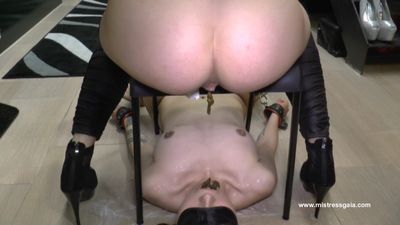 Lady Milena's slave had not been humiliated and punished in a while and he was starting to become unruly. The mistress put a stop to this by collecting her shit and feeding it to him

Jae wanted to surprise her slave with a present for Thanksgiving. She went to the bathroom and shit on toilet paper and then gave it to him as a present

Amy loves to humiliate slaves. She loves coming up with different ways of doing it. And this time she decided to use her shit. She shit and made him eat it

Messalina humiliates slave with her shit

Messalina was in the mood to humiliate her slave. She made him eat her shit straight from her ass. She did not care how cruel it was to him.

Lady Milena was mad at her slave. She wanted to send a message that she did not want that mistake repeated. She shit into the slave's mouth as punishment