Two slaves are going to find out that a mistress has just enough shit for the both of them. She is going to take a nice juicy shit on both slave's faces. The slaves were trying to challenge her to see if she could do it, and she was right on the money, because she coats both of the slaves with her warm smelly shit. Never challenge a mistress. 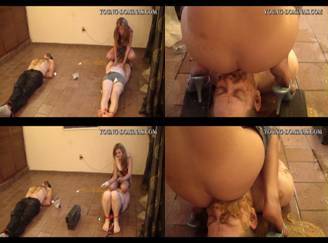 A slave is tied to stairs

Slaves are always going to be treated like shit, but some slaves will get punished and tortured a bit more than others. This particular slave will find out that he is no better than anyone else, because Chrystal is going to take a nice big shit right on his face while he is tied to the stairs. She will have a great time humiliating him on the stairs. 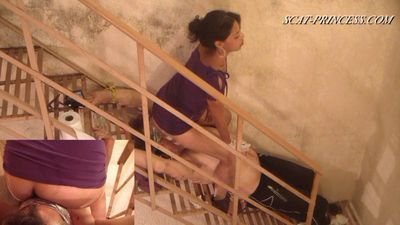 Many young domina's are going to get very valuable scat training from a very experienced mistress that will show them the place of a slave. The slave will be on the floor where all of the lovely ladies take turns shitting right on his face. The girls will learn a slave is nothing more than shit, therefore the slave should be treated like shit. The girls will shit on him all day long. 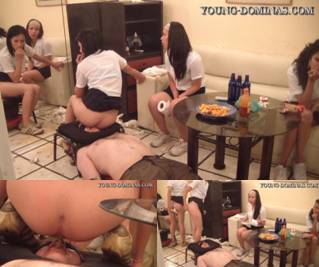 Mistress Gaia is taking a day off to shop and enjoy herself. However, she also is coming home to a slave that will be her toilet after a long day. The slave must clean the bottom of her high heels, then get ready to open his mouth wide for all of the shit that will fall out of the sexy Mistress Gaia's asshole. She has had a great day.

A slave fails miserably at gardening

A slave was given several tasks to do in a lovely mistress's yard. Naturally the slave messes up, which makes the mistress very mad. She is going to force the slave to clean gum off of her shoes, then she will squat down and take a very large shit right on his face and in his mouth. The slave better to get the task right next time.

Four very hot ladies are going to take scat play to a whole new level. These girls will shit right on the face of the slave. The slave will never get a break, because the girls will make sure that once he is finished eating their shit, another babe will push out more shit right on his face and mouth. These hot babes love scat play.

A slave will not only get shit on, but the slave's friend is also going to be included in all of the scat play. The mistress had decided that both slaves will get a nice warm load of shit on them. She is so happy to be shitting on the slave coating their faces will warm sticky shit that has the worst smell ever. They also must eat the shit. 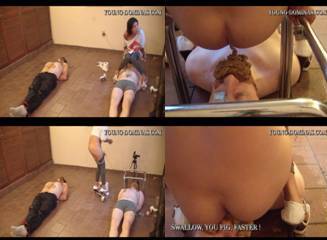 Princess April is a very popular mistress that loves to have fun. She could care less that her slave is in the room, but on the floor being used as a human toilet. Her goal is to make sure her slave gets as much shit on him as possible from all of the other ladies in the room. Her slave is a real loser and piece of shit. 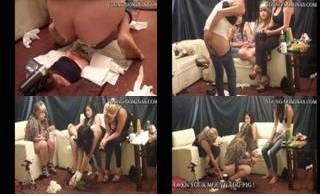 Chrystal has an adventure on stairs

Chrystal is always looking for new fun adventures. She is going to have her slave lay down on a set of stairs. She could care less how painful laying on stairs is, because she has a motive for her slave being on the stairs. Chrystal will take a nice big smelly shit right on her slave's face. She will also make him eat the shit too. 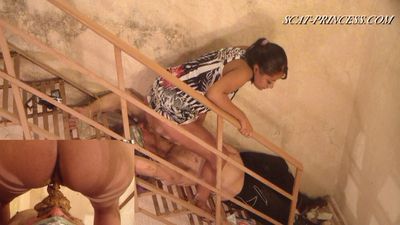 A slave is going to find out how bad things can get. He is going to shit into a bowl and be forced to eat his own shit. He will also have to drink his own piss. The mistress believes in making a slaves suffer and be tortured to the fullest. He is going to learn that it is her way or no way.